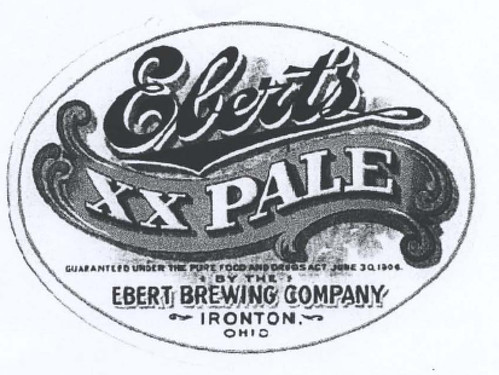 Originally called Eagle Brewing Company, the Ebert Brewery stock house was erected in 1863 on the corner of Seventh and Railroad Streets. Leo Ebert was the owner and operator until his death in 1908. By 1875, 6,000 barrels of beer and ale was produced annually. In 1891, a fire caused $10,000 worth of damage. After the flood of 1884, the brewery was used as a soup kitchen for flood victims. Otto Ebert took control of the brewery after his father’s death in 1908. The company was reorganized as the Ironton Brewing Company in 1917. The brewery closed after the passing of the 18th Amendment to the U.S. Constitution. No beer was produced there after May 1, 1919.

Ironton Register, May 2, 1878 – Lager versus Whiskey.
From Greenup Independent.
Leo Ebert, Ironton’s well known brewer, has accumulated, during the cool snap, last winter, not less than 1400 tons of ice, and thinks that this will enable him to brew this year 16,000 kegs of lager. Large as this figure may appear, it does not come near his produce five years ago, when he made 36,000 kegs in one Season. But few are aware of the enormous benefit the U. S. Government derives from this source of barley comfort, which forms so material a spring of recreation, health and happiness to our German fellow citizens, as well as to many brethren of American nativity, and which is fast conquering the whisky and brandy evil in the states. 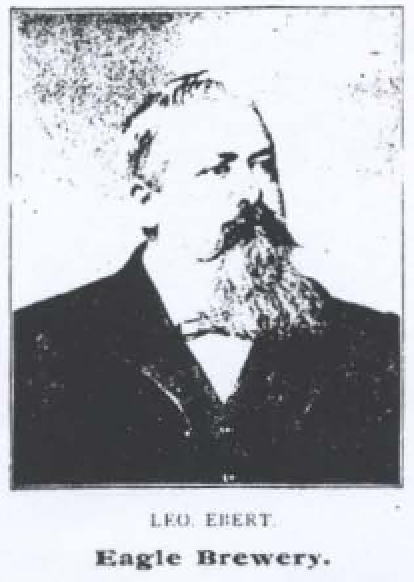 Leo Ebert, of Ironton, Ohio, founder and still president of the company of that name, was born in Klingenbergon-the-Main, Bavaria, June 28, 1837. The descendant of a family of brewers, he learned his trade at his father’s establishment, and began his career as a journeyman brewer in September, 1854. He worked at his trade in different places in Bavaria, Baden and Hanover, returning home in 1857, to accept a position as brewmaster in the plant of Jos. Amreihn, at Lohr, Bavaria. He remained there until May, 1859, and then left for the United States, arriving in New York July 16, of that year. He secured employment at Gillig’s brewery, remaining there until May, 1860, and then left for Cincinnati, Ohio. Unable to find work in a brewery, he labored in a brickyard at $1 per day. In the fall of 1860 he went to work at Joseph Schaller’s brewery, Cincinnati, being advanced in a short time to the position of cellarman. The foremanship of F. Beck’s brewery, in that city, being offered him, he accepted it and managed the plant until the Christmas of 1861, at which time a brewery at Ironton, Ohio, was offered for rent. Of this opportunity Mr. Ebert took advantage, and with the assistance promised and freely given by the big-hearted and generous Michael Goepper (the well-remembered father of Herman and Edward Goepper) he rented the little common-beer brewery at Ironton and started with a capital of $20; malt and hops, on credit, of Mr. Goepper.

Ironton being on the border of Kentucky and near the State of Virginia, became a very lively place during the war, and the brewery prospered. Beer was brewed Sunday and every day and sold when often not over three days old. The brewery not being well located, however, was abandoned and Mr. Ebert erected a new plant at the present site, in 1863, and began to brew lager beer. From time to time he enlarged his plant according to the wants of the trade in Ironton. He never meddled with the shipping trade, and to-day is glad that he did not, doing a nice business at home and fully enjoying the fruits of an active life.

Mr. Ebert has taken an active part in all questions pertaining to the welfare and protection of the brewing trade of the country. He joined the United States Brewers Association at the convention held in Cincinnati, Ohio, in 1863, and has been acquainted with all the old veterans of the trade. He was elected the first president of the Ohio State Brewers Association, serving from 1883 to 1887, and again after the reorganization in 1894. There has not been a legislature in session for the past thirty years in Ohio which has not found Mr. Ebert on hand whenever the trade was endangered or some relief wanted from obnoxious laws. In view of this record the United States Brewers Association did him the honor of electing him its president at the Milwaukee convention of 1895.

Mr. Ebert can say that he has been an active force in the development of the brewing industry of this country, from the so-called small or common beer for quick consumption, to the present export beers which are shipped all over the world. He remembers the time when the output of all the breweries in the United States did not equal the present output of some of our cities. He made beer in this country when there was no tax on it, while the 1900 tax on beer was three and one-half times the amount the United States paid Spain for the Philippine islands.

Mr. Ebert was married in Germany, in 1858, to Mathilde Uihlein, of Trennfurt, Bavaria. His family consists of six children five daughters, and one son (Otto) who is now manager of the brewery and is highly respected by the trade and community.

Mr. Ebert has always taken an active part in the development of the city of Ironton and has served in the capacity of president of the city council, member of the school board and board of health, his activities in this direction covering a period of seventeen years.