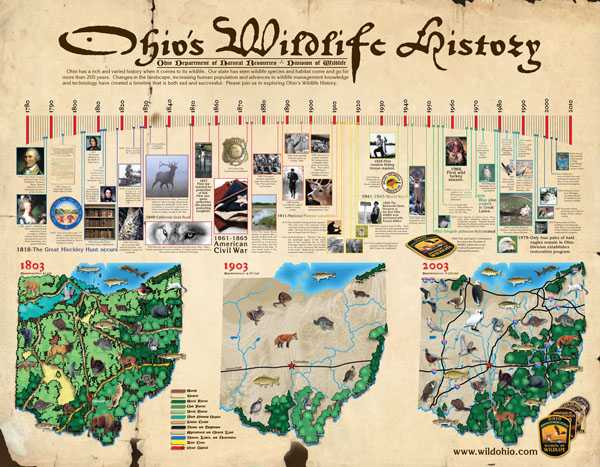 Frontier Fauna – Ohio’s Wild Heritage [“Fauna” means ‘the animals of a particular region, habitat, or geological period’ – yeah, I had to look it up….-NC]

“I . . . went to the south westward down the little Miamee River or Creek, where I had fine traveling thro rich land and beautiful meadows, in which I could sometimes see forty or fifty buffaloes feeding at once. . .” Christopher Gist, 1751

Centuries ago, Native Americans dubbed the winding river that met the Allegheny and flowed into the wild ancestral hunting grounds the “Ohio” meaning “beautiful.” Many of the early explorers, travelers and settlers who followed the Ohio River into the wilderness that would later become the state of Ohio agreed with the Native Americans’ sentiment, and offered their own accounts of the scenic beauty, natural diversity and abundance of wildlife they encountered.

Along their treks through Ohio’s array of familiar and foreign landscapes-from impossibly dense forests to wide-open prairies, mucky bogs and swamps to broad river valleys-these adventurers were awestruck by enormous flocks of passenger pigeons darkening the sky, delighted by colorful Carolina parakeets shining like gems in the treetops, and mesmerized by dusky prairie chickens leaping above the tall grass during their courtship dances. They were impressed by the huge fish and the plentiful deer, beaver, elk and bison, not to mention the bears, wolves and panthers.

For the Native Americans and newcomers, alike, Ohio’s indigenous animals furnished meat, fur, hides and oil that were essential to frontier survival and commerce. Frontier Ohio’s blend of habitats, where the primeval forest of the east mingled with patches of grassland that foretold of the vast prairies to the west, created a rich environment for big game. The wealth of rivers and streams framed by the great freshwater lake and the beautiful river provided even more natural treasure. The Muskingum River teemed with monster muskellunge, many of which weighed in at 40 pounds, and an amazing assortment of freshwater mussels that were commonly on the menu at meals prepared by both Native Americans and pioneers.

“The Muskingum (means) Elk’s Eye, so called because of the numbers of elk that formerly fed on its banks, these animals being found there even at the present time…”

The humble pigeon was also an important food source from pre-settlement times, and for generations after Ohio’s statehood. The enormous flocks provided easy pickings with a rifle or arrow while on the wing, and once the birds roosted, hundreds could be scooped out of the trees. In 1806, pioneer ornithologist Alexander Wilson described a flock of more than two billion passenger pigeons passing over head for several hours in a formation estimated at one mile wide and 240 miles long. Well into the 19th century, Buckeye Lake remained a prime roosting spot for astronomical numbers of passenger pigeons.

Predators also thrived on the frontier. The evening chorus of howling wolves often intimidated isolated settlers, but their livestock had more to fear from the hungry wolf at the door. Cougars, also known on the frontier as panthers, would typically avoid humans if unprovoked, but could attack viciously if their young were threatened. Some areas were thick with rattlesnakes, which could prove deadly to the unwary who failed to heed their warning. Despite the natural hazards on the frontier, though, humans faced far greater danger from each other than from any of the wild beasts of the forest.

“…Right up to our doorsill reaches the huge, somber and vaulted forest. There are no openings to break up the overshadowy wolf-haunted woodland…The sunlight cannot get through the arches of the murmuring leaves. Through the grayish shadow and down the pathways in the forest men walk, continually in a kind of midday gloom…”

Livvat Boke, memoirs from 1834 after her emigration from Germany to Mercer County

In contrast to life’s daily hardships and perils, tales of close calls with wildlife made for amusing campfire entertainment on the frontier. Circuit riding preacher Reverend Joseph Badger recalled in his 1803 memoir that just before nightfall, he was traveling unarmed along the Grand River when he encountered a huge bear. “Supposing the brute would run, as several had done which I had met before, I slapped my hands and halloed at him. But instead of running, he raised his hair on end, and snapped his teeth violently… To run away was impossible, in a pathless wood, thick with rush and fallen old timber. I concluded to resort to a tree, if I could find one…I soon got hold of a limb large enough to bear me, and at this instant the evil beast came to the tree with a violent snuffling and snapping…I then ascended about forty feet, as near the top of the tree as I thought was safe; found a convenient place to sit on a limb, and tied myself with a large bandana to the tree, so as not to fall if I fell into a drowse…”. At dawn, the bear finally gave up and lumbered away. Badger concludes his hair-raising story on a light note, “My horse standing at the tree without moving a foot from the place I left him, and in no way frightened by the approach and management of the bear, seemed peculiarly Providential. This was the only time I was disturbed in camping out many times…”

“In the early times of Cuyohoga County, there were bears, wolves, deer a few elks, wild turkeys, coons porcupines, opposums, squirrels, wild ducks, geese and pigeons innumerable. They too have nearly all left…”

Another traveler treed by wolves used music to soothe the savage beasts. Joseph Barker, an early settler at Marietta, relayed a story in his 1795 journal of a neighbor who cleverly survived an encounter with wolves.

“A man by the name of Bagley, fiddler, coming from Wolf Creek towards spring one cold, snowy frozen afternoon, was attacked by a

large gang of wolves who drove him up a tree, where he had to sit and play the fiddle for them until they saw fit to leave him the next day.”

Not only did early explorers describe the living animals they saw, they also encountered baffling evidence of extinct prehistoric wildlife. In 1775, adventurer Nicholas Cresswell noted in his journal that his party came upon enormous bones and a tusk in a salt lick. The local Indians believed the bones to be the remnant of a white buffalo that died by drinking salt water, but Cresswell had seen an elephant tusk from Africa, and was convinced that the creature was somehow related to the elephant. Apparently, Cresswell was unaware of earlier mastodon finds in the colonies, and remained perplexed, “…Their neither is nor ever was any elephants in North or South America, that I can learn, or any quadruped one tenth part as large as these was…”

As Ohio’s frontier days came to a close, the impenetrable woods of the Great Black Swamp of northwest Ohio became a last refuge for elk, wolves and lynx. The 1,500 square mile tract of enormous trees standing in perpetually muddy ground, dotted with limestone outcrops and sand ridges, was the last area of Ohio to be settled. Even as the newly completed canals were shuttling passengers and goods from one end of the state to the other, this remote corner of wilderness stayed suspended in time.

In the span of a few generations, though, settlement, agriculture, loss of habitat and over-hunting took a heavy toll on Ohio’s native wildlife. The last buffalo in Ohio was shot in 1803 near the present site of Vesuvius Furnace in Lawrence County. Bounties offered for panther scalps were discontinued in 1818, and the big cats were believed to be eradicated from the state in 1838. Beaver disappeared by 1830, and by 1850, black bear, elk, gray wolf and bobcat were considered extirpated from Ohio, although they continued to live in some neighboring states.

“I am of the opinion that deer are plentier in this country that horned cattle are in New England. However, this state of things will not last long; for whenever a country begins to be settled, the native inhabitants must either flee or perish outright…”

By the time the state celebrated its 80th birthday in 1883, 83 percent of Ohio’s original forest had been cleared. White tailed deer sought cover elsewhere, and by 1904 were no longer found in Ohio. Bald eagles used to nest by the hundreds on the shores of Grand Lake St. Marys before 1900, but were rarely seen decades later. Prairie chickens lost too much of their habitat, and were extirpated from the state by 1900. In 1900, the last wild passenger pigeon in Ohio was killed, and the entire species became extinct in 1914 when the last captive passenger pigeon died at the Cincinnati Zoo. The exotic-looking Carolina parakeet, the only native parrot in eastern North America, had become quite rare by the early 1800s. The last record of a sighting in Ohio was a small flock flying over the new capital square in Columbus in 1862, and the species was considered extinct after the death of the last captive Carolina parakeet at the Cincinnati Zoo in 1918.

A few of these species are gone forever, but a number of Ohio’s native wildlife species that had become extirpated from the state are finding their way back. Beaver first reappeared in 1936 in Ashtabula County, and their numbers have increased steadily statewide. One of the most remarkable comeback stories is the white-tailed deer, which was first restocked in Scioto County in 1936. Subsequent reforestation efforts around the state by the Division of Forestry have increased Ohio’s forest cover to more than 30 percent, and enabled the deer to thrive. Through careful nurturing by the Division of Wildlife, the magnificent bald eagle is once again an Ohio resident, with more than 120 nests along Lake Erie, the Ohio River and several of Ohio’s inland state park lakes, including Grand Lake St. Marys.

Thanks to the stewardship of more than 164,000 acres of state park lands and waters and additional public lands that remain largely undeveloped, coupled with reintroduction efforts and habitat improvements, modern Ohioans can catch a glimpse of many of the wild creatures that graced the untamed Ohio frontier.

Foster, Emily, Editor, The Ohio Frontier – An Anthology of Early Writings, The University Press of Kentucky, 1996.